Saar started doing circus when she was 5 years old at Circus Elleboog, a youth circus in Amsterdam. When she was 18 she traveled around New Zealand for half a year and ended up with a circus family, which made her decide to audition for a circus school.

She studied at the Academy for Circus and Performance Art in Tilburg, the Netherlands from which she graduated in 2012 specialised in triple cloud swing and vertical dance. Since then she has participated in a documentary about contemporary circus, “Grazing the Sky” by Horacio Alcala. She taught and performed at aerial dance festivals in Ireland, France, Costa Rica and Houston, Texas.

Over the last two years she worked together with Maartje Fijen to create a half hour duet, “Hand in hand”, combining contemporary dance and triple cloudswing. For this they got several grants and residencies, like the Clear Sky residency from Fidget Feet where Lindsey Butcher worked with them as an outside eye. The last year she worked as a rigger and stage manager on tour through the USA with the Acrobatic Conundrum and a tour through Sweden and France with Circus Cirkör with the show Epifonima.

Now she is doing a two year research master in Contemporary Circus Practices at Doch in Stockholm. There she is doing research with a lot of rope constructions and creative rigging. 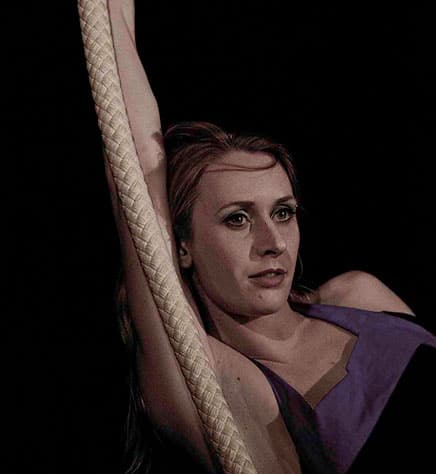